Here are the Baltic harbour porpoises!

Harbour porpoises are now clearly shown to be present in a large part of the Baltic Proper.

A complete map, showing in which of the 304 monitoring stations porpoise clicks have been detected, can now be presented. The detection rates, averaged for all stations in the different countries’ EEZ, or larger parts of the EEZ, are shown in shades of blue in the map. The information in this map is more than we have ever known before about the Baltic harbour porpoise distribution, and much more will come when the data have been analysed in depth.

The Baltic harbour porpoise population is classified as critically endangered. However, because traditional survey methods from ships or airplanes produce insufficient data in this low-density population, this classification is based on very uncertain abundance estimates. Therefore the SAMBAH project employed a new method, using a large number of anchored porpoise click detectors, so called CPODs, which log the echolocation click sounds used by porpoises to navigate, find fish to eat and communicate.

SAMBAH is to this date the largest PAM project in the world. To cover the known historic distribution range of harbour porpoises in the Baltic Proper, the Sea of Åland, the Archipelago Sea and the Bay of Finland, as many as 304 CPODs were required. In an attempt to reveal seasonal variations, these CPODs have been kept in operation for two full years. This made the field work a logistically very challenging undertaking.

The next step will be to use the population density data in so called spatial modelling, which will generate much more detailed distribution maps, showing seasonal variations and also clarifying the relationships between different environment factors and harbour porpoise distribution. Based on these maps, it will be possible to identify areas of importance for harbour porpoises, and areas with increased risk of conflict with human activities. This will also be very important input to the national action plans.

The density and abundance calculation will be completed during the spring and the result of the habitat modelling will be presented during the fall of 2014. SAMBAH’s end-of-project conference will be held at Kolmården Wildlife Park, Sweden, on December 8-9, 2014. 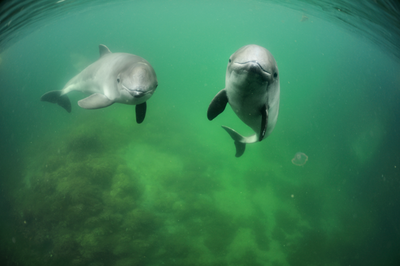 The harbour porpoise is one of the smallest toothed whales, with a body length of 1.5-1.9m and a body weight of 50-70kg (females grow larger than males). The head lacks a beak, the dorsal colour is dark, almost black, and the dorsal fin is small and triangular. Its surfacing behaviour is mostly inconspicuous, and the blow almost invisible. It feeds on herring, sprat, small cod and a variety of bottom dwelling fish, like sandeels and gobies. The species has a wide distribution in temperate waters in the northern hemisphere. In the Baltic region, there are three harbour porpoise populations; (1) in the Baltic Proper and North-Northeast thereof, (2) in the Belt Seas and Southern Kattegat and (3) in the Northern Kattegat, Skagerrak and the North Sea.